Apple introduced some exciting new features in iOS 10 during WWDC 2016. How do they compare to iOS 9? Let's take a look!

Apple News has barely reached it's one year anniversary, yet there are some noticeable improvements. Apple News still maintains the basic menu options along the bottom (For You, Favorites, Explore, Search, and Saved), but in iOS 10 users will notice a more pronounced use of typography, defined by bold letters and the use of color to highlight different sections. In contrast to browsing articles by vertically scrolling up and down, sections can also be accessed by scrolling horizontally or by tapping on an arrow to browse articles related to a specific topic like "politics." Apple also will introduce subscriptions in iOS 10, essentially converging Apple News with Newsstand. 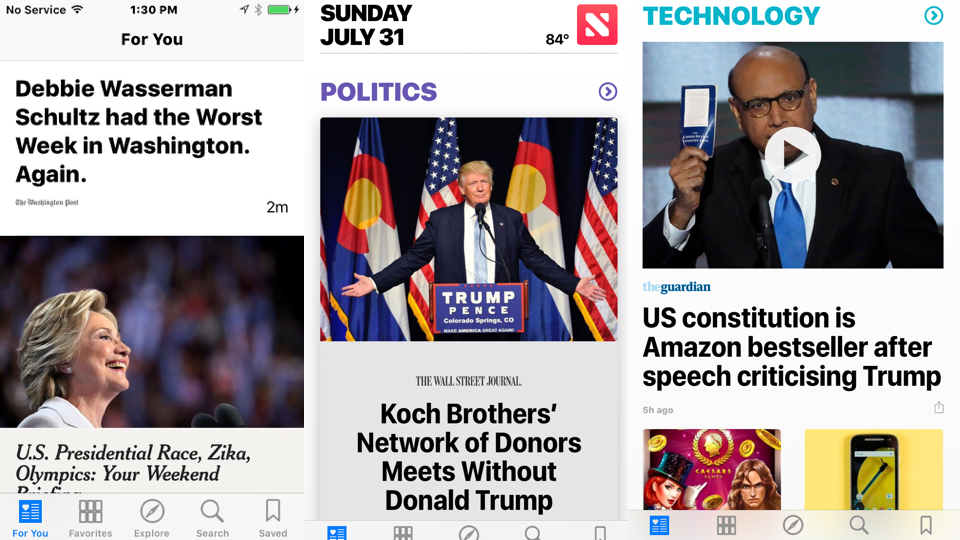 Apple Music is also celebrating its one year anniversary after an exciting debut. Apple Music dramatically changed the way Apple customers used iTunes, including streaming music and Beats One radio. Some people found the app confusing, mainly because it was challenging to take in so many features at once. In iOS 9 (below), Apple introduced five menu options along the bottom: For You, New, Radio, Connect, and My Music. Connect, a reinvention of Ping, never really took off as a major feature, so it was removed from the main menu and added to the bottom section called For You. Apple changed "New" to "Browse" and moved the search icon from the top right to the main menu tabs below. 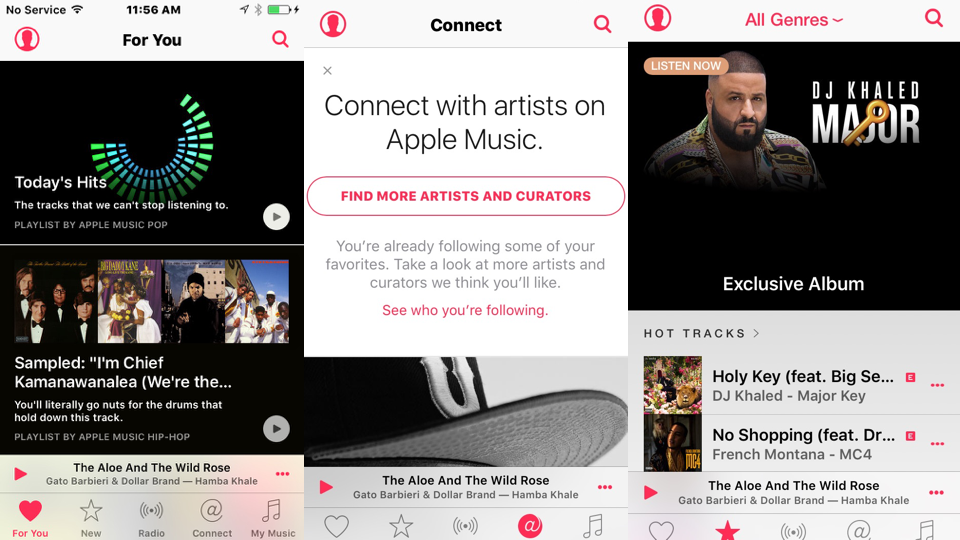 In iOS 10, Apple Music simplifies the user interface, adding clarity to the typography and simplifying the categories to make it easier to access the music you want. ​Similar to Apple News, headings like Sunday's Playlist, Monday's Albums, or Artist Spotlight Profiles are identified by bold fonts and thumbnails that can be browsed horizontally, swiping left to right to access other music titles. One standalone feature that was not included in iOS 9 is the inclusion of "lyrics," which can be found as an option under each song title. Overall, the graphic design and layout of the app is superb and navigation is a lot easier. 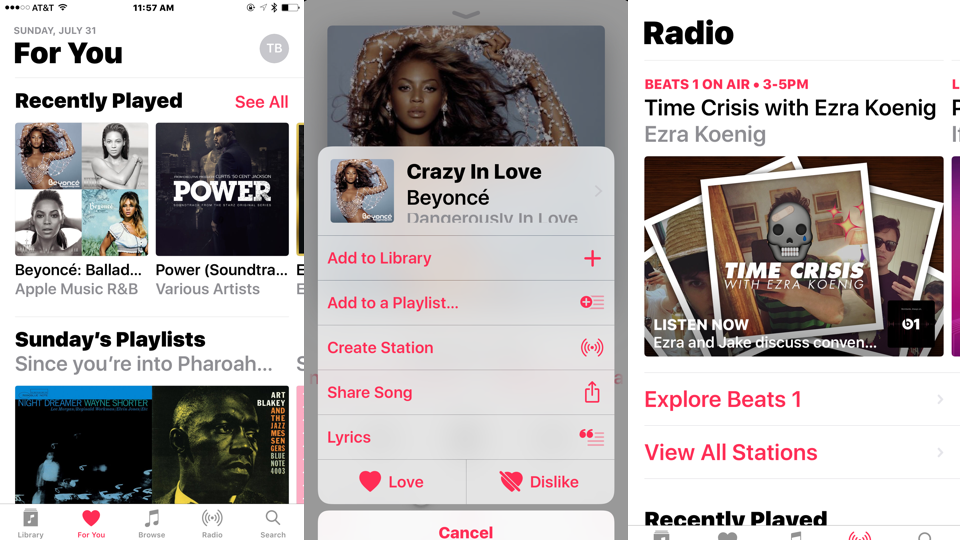 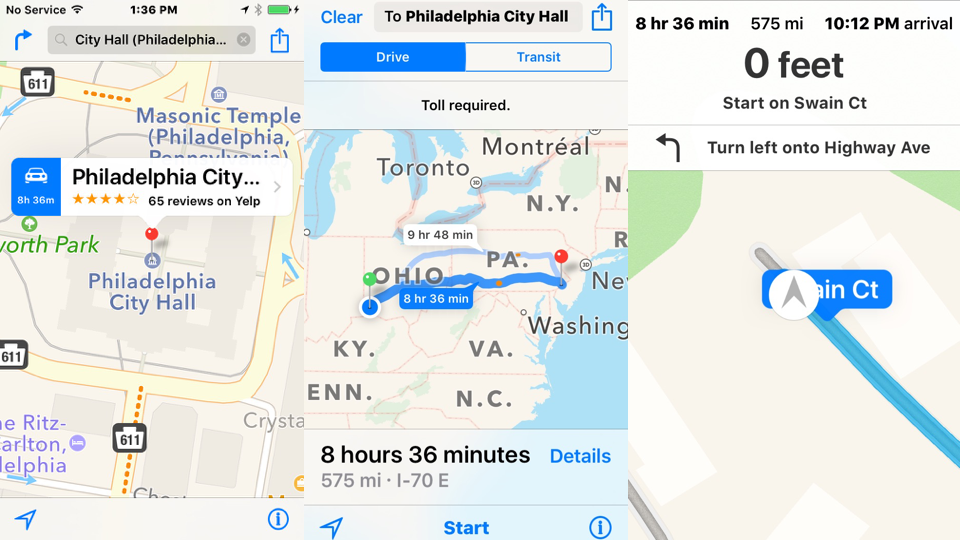 In iOS 10, users can swipe up from the bottom to find more information about their destination, including related photos. Before pressing start to proceed to a destination, a new menu appears along the bottom to clarify travel options. In contrast to the two menu items for "drive" and "transit" found in iOS 9, iOS 10 puts a menu bar along the bottom with four options: drive, walk, transit, and ride. This simplifies access to these services without having to bounce back and forth between menu screens. In travel mode, users can also swipe up from the bottom to quickly access a menu for restaurants, gas stations, overview of travel route, details of travel route, and advanced controls for the Siri navigation voice. 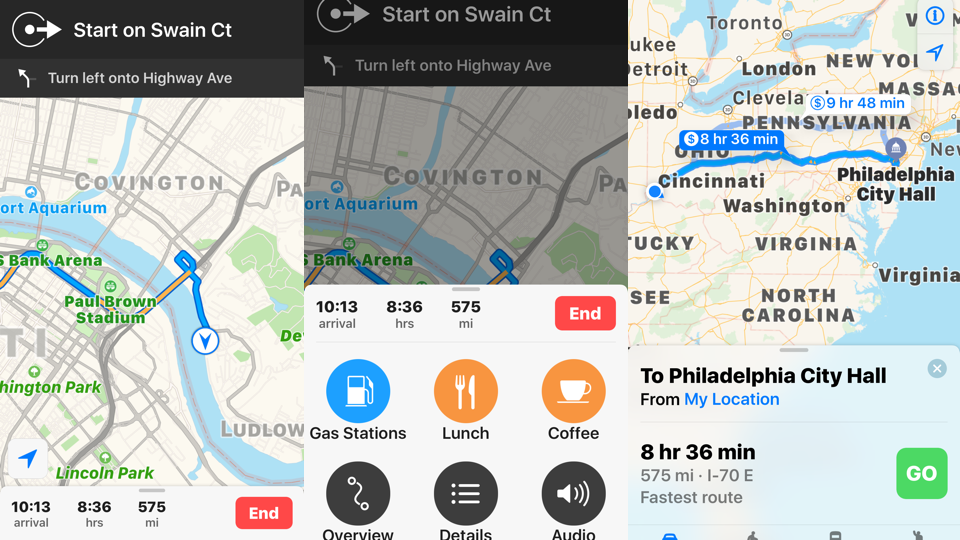 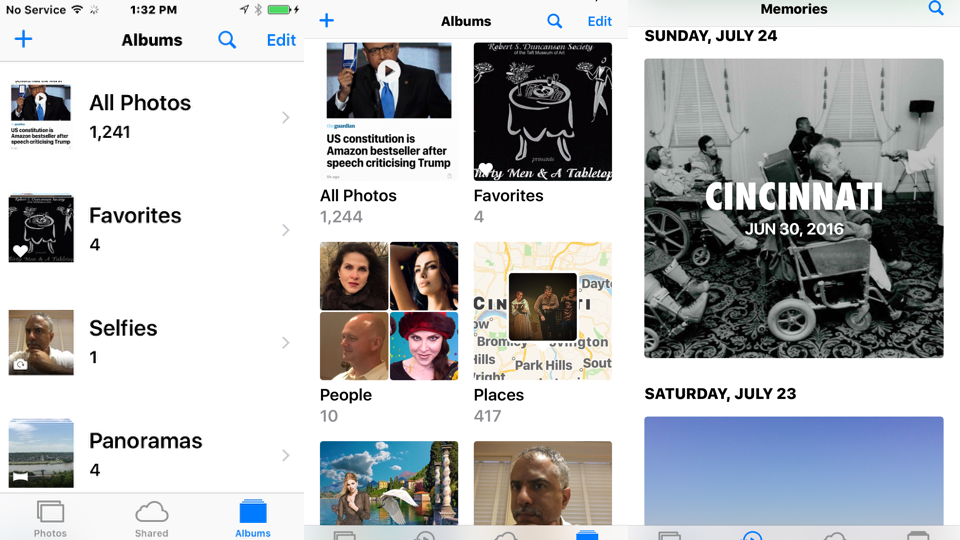 Relying on metadata (people, places, date and time, etc.), photos are arranged in the form of memories that are displayed in mosaic or tile view. Memories can also be customized. By tapping on the title of each memory, users can preview a video slideshow of all the photos in that grouping (this can also be done selectively). Users can choose between 10 themes (dreamy, sentimental, gentle, chill, happy, uplifting, epic, club, extreme), and several video lengths, short medium and long. Further adjustments can be made to change titles, music, duration, and the number or selection of videos and photos in your slideshow. This feature will most likely replace a number of third party apps that provide similar features. 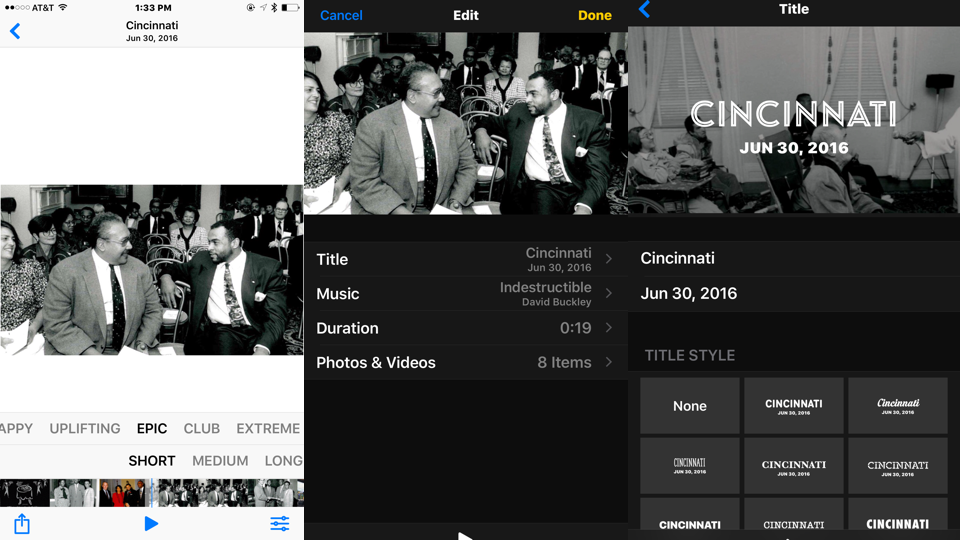 Messages is by far the biggest and most exciting upgrade in iOS 10. When comparing the new features to iOS 9, you will immediately notice broader menu options and easier access to features that are integral to messages like photos, videos, gifs, iTunes music, and emoji's. The app brings many of the features found in the Apple Watch, like animated drawings and emojis, and new features like invisible ink and an App Store. The latter is a result of Messages opening up to developers. 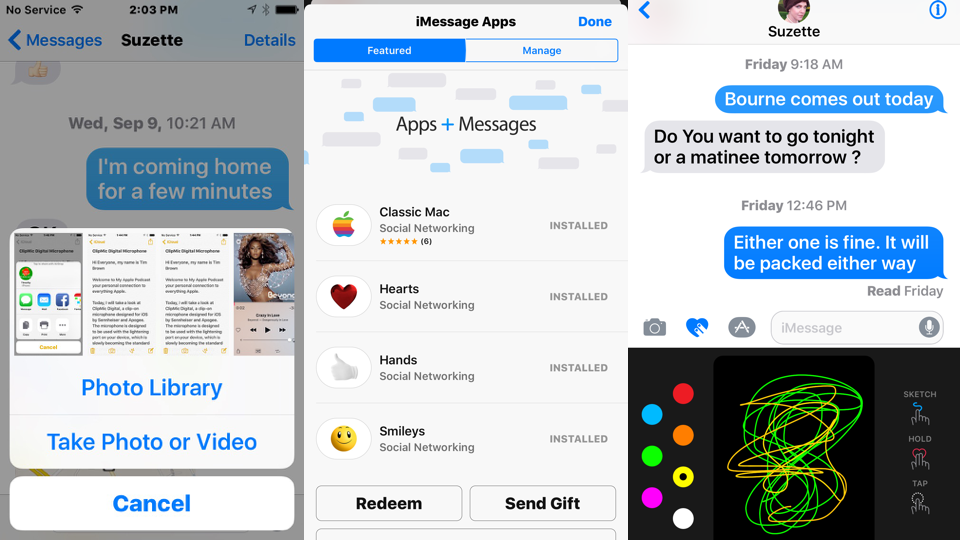 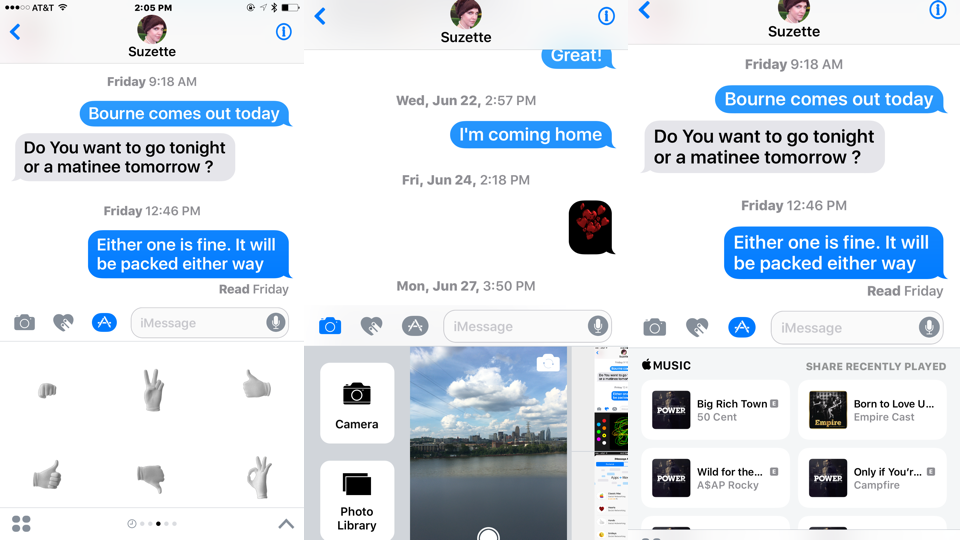 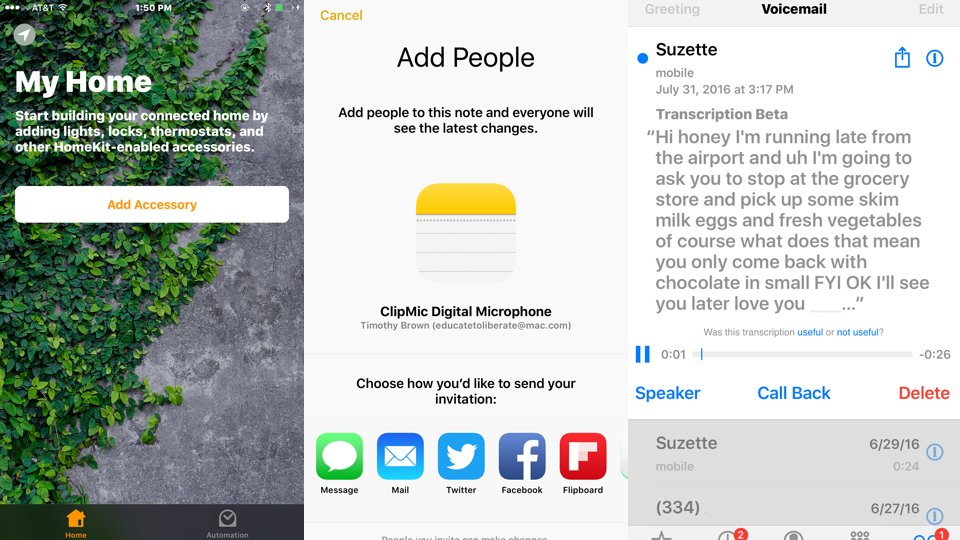 You will also find a number of other additions in iOS 10 such as the ability to collaborate in the Notes application, the ability access notifications, mission control, and music from the lock screen, a devoted app for Home automation, transcriptions for voicemail, and a split screen view for Safari on the iPad.

When comparing the two versions, it's hard to find a justification for not upgrading to iOS 10. The new operating system, officially available this fall, is more robust, including impressive graphic design features that are visually more appealing and highly functional. Happy Anniversary!